Who Are Your Top Performers?

Recognising top performance in your people is vital. Such people need to be treated differently than the rest; they are special.

Everyone is different, of course. But, to twist a famous quotation, some are more different than others.

By “performance”, we mean the ability of your people to do their jobs effectively and to produce the results that are required.

The employees in your organisation who produce the results they are supposed to achieve, in a consistent and timely manner, are not simply doing their job – they are directly contributing to the top performance of your organisation in a very positive manner. You should make an effort to recognise who they are. They are worth protecting.

People, acting together in groups, should be moving in the same direction. Sadly, however, this is not always the case.

So, again, what is performance? Let’s use a graphic analogy to get the point across. Imagine each person in your organisation is a helium balloon with a sandbag hanging from its string. 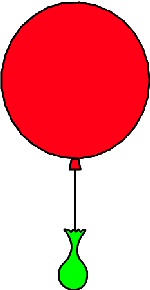 If you extend this concept, you can bind several balloons together so they form a cohesive group. That is now a picture of your organisation.

But an organisation, of course, is composed of individuals. So what is the make-up of each of these individuals? What is the relationship between the helium and sand in each case?

As a manager, where do you spend most of your time? Well, it depends on your own specific operational environment, of course. But if you think about it, you probably spend very little of your management time on those people who get on with the job and produce top performance consistently.

On the other hand, those employees who frequently botch it up, or produce substandard results, are the ones who drain your time and cause most of the heartache in your job. How much easier would your job be if you had a higher percentage of people who just got on with it and did not drag your attention away from other operational activities?

The more individuals you have in this cohesive group with a good endowment of “helium” (and with less “sand” than normal), the better off your whole operation will be — an important factor when hiring.

There is probably no-one who is totally status quo in this regard. In other words, you won’t find balloons that have exactly the same force upwards, as downwards. You don’t usually see helium balloons just hanging in mid air. They are either going up, or going down.

The truth is that each employee is either helping the top performance of your organisation, or they are impeding it in some way. But, there are two exceptions:

But if you hire such a person and tie them into the bunch with the rest of your “balloons”, you may find out later that they have these small, hard-to-detect needles on their outer surface. These hidden barbs will damage surrounding balloons so they lose their helium, reducing the power of the whole. Top performance goes out the window!

Did you ever find, from one year to the next, that you seem to be having much more trouble in your team? Chances are that you placed a new person in there who is actually bringing the others down.

See the article on Office Politics to get an expanded explanation of this.

The basic principle, of course, is that if you add a new balloon to the ones you already have, you want to make sure that it will be helping the whole system to rise. That means that you should not, for any reason, hire a “balloon” which has too much sand, or not enough helium. If you do, the effect will be to reduce the overall power of your organisation and your own top performance will diminish.

The surprising fact, however, is that the reverse of this concept is also true.

When you get rid of a balloon with more sand than helium, the whole system tends to move upwards towards top performance again, even if you do not replace the ineffective employee immediately!

Looking at the balloon theory, if you cut loose one sand-heavy balloon, the remaining group will move up.

This means that when you have a person who is not contributing to the team effort, and you take them out, your action will benefit the productivity of the remainder. Of course, if you can also replace that person with an effective employee, that will be even better.

Far too often, however, we hear comments along the lines of:

The fact is, you can always afford to get rid of dead weight. And when you do, the rest of the group will produce better results, even before you replace the non-productive or destructive employee. Top performance is actually jeopardised by leaving them there.

(A word of clarification here. We are not advocating that you rip through your organisation and immediately sack everyone who is not performing. Due process must occur, of course. But where you have identified someone who has legitimately qualified for off-loading, do not then hesitate, just because you do not have a replacement.)

You can categorise your employees into three basic groups:

The top 20% of employees do make a big difference to your top performance. Here we are looking at balloons with plenty of “helium” and very little sand. They really help to push the system far up into the “sky”. In addition to that, they compensate for the “sandbags” who are not carrying their own weight.

Here you have the employee who always gets it right. He or she is the one you know you can rely on. If nobody else can fix it – he/she can. And they never cause any problems or demand any of your management time.

In the middle, you find the 60% who are average producers. Their productivity depends on how well the management handles them. You see, these balloons need to be “pumped up” from time to time, i.e. they need to be motivated. Top performance people don’t need these extra shots of helium. They bring their own motivation with them to the job. In fact, the job itself is highly motivating to them.

If you have a sales force, this phenomenon is very obvious.

Then we have the least productive 20%. These mostly comprise the erratic performers who could also be called “ups and downs” balloons.

These ones, at certain times, are really pumped up. But the next day it seems that their sandbags have suddenly increased in weight! Such unpredictable people are the source of nearly all of the internal upsets and costly mistakes you experience. They are also the ones who take most of management’s time and attention.

They are usually easy to spot, however. Have you ever had a team member who did an excellent job one day, but the next, they never answer their phone and never returns calls?

Protect Your Most Valuable People

The balloons that are at the very peak of top performance, as stated before, are the ones that demand very little of your attention.

Beware, however, not to neglect them. You do so at the risk of losing them to one of your competitors. The main thing to watch out for is that people who produce top results are subject to attack by certain types of non-performers.

If there is some sort of conflict going on, look at the performance levelof the people involved and protect those who are actually producing good results.

Finally, if you could make sure to avoid hiring people in the lower bands of production, but at the same time put on a few more top performance people, this would give you a higher percentage of effective people!

What is performance? It is what produces an extremely healthy result for your company’s profits, as well as for the general satisfaction and spirit of your whole organisation.